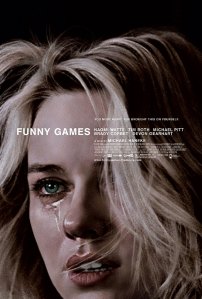 One thing I was apprehensive about when I went to see Haneke’s US remake of his own Austrian-made 1998 cult classic was its possible merciless mainstreamisation to woo a larger US audience. In place of the John Zorn score that violently crashes into the introductory sequence of the original, I expected Slipknot, or whatever else Americans find scary these days. No such disgrace: Haneke remained so faithful to the original he even recycled its music score, and John Zorn’s Bonehead still sounds every bit as unnerving in 2008 as it did then. This is a scene-for-scene, frame-for-frame, line-for line remake of the original, except it’s in English language. With that concept, it’s impossible to sell out, although it seems that the sole point of this exercise was to make the movie accessible to an audience too lazy to read subtitles. Funny Games US is hardly any worse than the original, and certainly not better.

Variations occur only in the individual performances of the actors. Indie film darling Naomi Watts does a good job as the mother of a family terrorized and tortured by a duo of sadistic youths, although she’s maybe a bit too beautiful and fragile compared to Susanne Lothar’s more credible middle-class mom from the original film. Brattish Michael Pitt doesn’t have quite the same diabolic aura of Arno Frisch’s villain, but reciting the same lines on the same director’s cue, he too can’t really go wrong .

The most demanding sequence from an acting point of view is the cracked mother’s struggle to loosen her ties and help her injured husband up while suffering a nervous breakdown, which consists of a single camera take that lasts for about five minutes without edits. I will never forget Susanne Lothar’s performance of this in 1998’s version. The remade scene appears somewhat shorter in Funny Games US and allows Ms Watts to pop out of the frame for a few moments, during which I imagine she has a glass of water and a line of coke. Disappointing. It would have been real Olympic spirit if she had been required to persevere, or even ‘topped’ Ms Lothar’s original performance by adding another minute or two.

For those who haven’t been warned yet, Funny Games is an almost unbearably tense, cruel, and sadistic edge-of-your-seater. It’s Last House On The Left if a smart director like Polanski had shot it, with excellent dialogue and a dark sense of humour. Sure, there’s also a media-critical dimension, but essentially Funny Games falls into the same category as movies like Cannibal Holocaust, whose entertainment value derives from the very ingredients they half-heartedly condemn. In this case, the finger is pointed at our fascination with violence and reality shows… or something along those lines. As usual with Haneke, it also contains a critique of the bourgeois family, but other films of his are more successful at provoking thought. As a relentless and cynical shocker, though, Funny Games is superb even in its new incarnation.

If you’re unfamiliar with Haneke and want to see more by the most gifted director of our time, I recommend Time Of The Wolf, whose poetically apocalyptic atmosphere is what I hoped Dawn of The Dead would be like when I was a kid. Work your way backward from there and see ten feature films without one disappointment, but don’t even go near if easily upset, disturbed, or depressed.

Whether American audiences are ready for Haneke’s bleak outlook is arguable. US critics are foaming, evidently deeply affected by what they feel is an attack on middle class America. One typical viewer comment addresses the director’s refusal to resolve the story in a traditional way as follows: “We hope for justice but none comes. Protest about this!”

Wanna bet Leonard Maltin will give it zero stars in next year’s Movie and Video guide?