This is a ‘tripping stone’ (Stolperstein) memorial for Helmut ‘Helle’ Hirsch, who in the 1910s-30s grew up here in Seestraße 89. Located in a traditionally affluent neighbourhood in the west of Stuttgart, the stone was laid in 2007.

Helmut Hirsch was born into a well-to-do Jewish family in 1916. At the age of 15 he joined the ‘Deutsche Jungenschaft vom 1. November 1929’, also known under the abbreviation dj. 1.11 and an interesting group within the German neo-romanticist youth movement. Unlike many such bündisch groups, it embraced rather than rejected modernity and its aesthetics and felt an especially close kinship with the Bauhaus. In the spring of 1932, the group’s leader Eberhard Koebel – also known under the pen name tusk (‘the German’) and the author of the song ‘Über meiner Heimat Frühling‘ – temporarily joined the Communist Party, which caused many members to leave. END_OF_DOCUMENT_TOKEN_TO_BE_REPLACED

The Unearthing The Music database has republished my article, Punk in Bulgaria 1979-2008, which I wrote 11 years ago.

Reading it back after such a long time is rather painful – I’m sounding young and naive. Still, I’m pleased to find that I managed to steer clear of lazy cliches along the lines of ‘when punk brought freedom to Eastern Europe’.

Find the piece here. Thanks to Lucia Udvardyova for her interest in republishing this.

I have translated a review of Leon Trotsky’s memoirs by the famous ‘conservative revolutionary’ author, Ernst Jünger, into English. The original review appeared in a 1930 issue of Ernst Niekisch’s Widerstand journal. My translation is available on the Verso blog now.

I have translated original German-language reports and theses from the first and second conferences of the Communist Women’s International, which took place in Moscow and Berlin in 1920 and 1922 respectively. This material, translated for the first time into English, will be published in The Communist Women’s Movement, 1920-22 (edited by Darya Dyankova and Mike Taber) as part of the Historical Materialism Book Series by Brill in 2020, followed by a paperback by Haymarket.

Despite its statement of purpose, the ARPLAN blog, which spuriously claims to serve “education and illumination, not an endorsement of any particular political philosophy”, looks rather like a ‘fash’  blog. No critical distance between the blogger and the reproduced material is evident, and indeed, the pictorial design and pull-quotes adorning the sidebar would suggest a certain congeniality. I am happy to be corrected of course.

Having said that, it’s a useful ‘fash’ blog: like the sadly defunct Ernst Niekisch Translation Project before it, it provides English translations of rare texts from the German conservative revolution, especially where right-left syncretisms seem to occur. Thankfully coming from a rational Marxist tradition, I believe that most people are capable of processing problematic ideas critically. Hence, I feel no need to pretend that the blog does not exist, lest some impressionable soul becomes too infatuated with its contents. END_OF_DOCUMENT_TOKEN_TO_BE_REPLACED

Last week’s edition of Weekly Worker featured my review of Jonas Åkerlund’s movie, Lords of Chaos. I went with low expectations and enjoyed it more than I should have.

“The story of the Norwegian black-metal band, Mayhem, is unusual. Its first long-term vocalist – the aptly nicknamed ‘Dead’ (Per Yngve Ohlin) – shot himself in the head, putting an end to years of crippling depression and self-harm. Later the band was joined by a bassist called ‘Varg’ (born Kristian Vikernes), who allegedly initiated a wave of Christian church burnings, earning the early-90s Norwegian black-metal scene international notoriety. Before Mayhem’s debut album was even released, Varg stabbed the guitarist and band leader, ‘Euronymous’ (Øystein Aarseth), to death in what he claims was “self-defence” – he delivered 23 stab wounds, including two to the head. De Mysteriis Dom Sathanas (1994) is probably the only album in music history where a murderer and his victim can be heard playing together.”

I have previously written on Ernst Niekisch’s infatuation with Stalin’s Soviet Union at the onset of the first five-year plan. In an episode that is not unheard of but fairly under-researched, lacking in archival material especially on the Soviet side, an ‘Association for the Study of Soviet-Russian Economy’ (ARPLAN) was founded upon Ernst Niekisch’s initiative on 14 July 1931. It comprised German far-right intellectuals such as Ernst Niekisch and Ernst Jünger, who were fascinated by the Soviet Union’s mass mobilisation and autarky drive, engineers and scientists, KPD members overseen by György Lukács, and some leftist fellow-travellers.

ARPLAN culminated in at least one guided field trip to the Soviet Union in August 1932, which Niekisch participated in. “The majority were fascists”, as the head of the European sector of the USSR’s ‘All-Union Society for Cultural Ties Abroad’ (VOKS) later reported, “but the trip made no deep impression on them”. A somewhat underwhelming result, given the Soviets’ 1930-33 “cultural-political line” of “deeply penetrating radical and right-oppositionist circles of the intelligentsia” in Germany, as key VOKS thinker Aleksandr Girshfel’d put it, and “propagandising the idea of politico-economic rapprochement (sblizhenie) with the USSR”

Either way, Soviet-curious conservatives and Nazbols were quickly marginalised when Hitler was handed power in January 1933, although some, such as Niekisch and his Widerstand colleague Ernst Jünger, were allowed to continue publishing for a while. Part of the reason was Goebbels’s desire to co-opt Niekisch, whom he held in high esteem as a ‘national-minded intellectual’ – the feeling was not mutual, as Goebbels soon learned. Moreover, Niekisch’s Widerstand journal enjoyed considerable resonance in conservative military circles, whose support for the Nazi government was far from certain at the time. END_OF_DOCUMENT_TOKEN_TO_BE_REPLACED

Original copies of Ernst Niekisch’s pamphlet, Hitler: Ein Deutsches Verhängnis (1932), cost no less than £150-180 nowadays, so I made do with a neat facsimile printed by AHDE publishers of West Berlin in 1979. This curious little publishing house specialised in anarchist pamphlets, including classic texts by the likes of Erich Mühsam, but also printed all manner of ‘cross-front’ and Nazbol literature.

The pamphlet is essentially an ulta-right idealist critique of Hitler’s ‘legalist’, ‘pacifist’ and ‘Roman’ (rather than ‘German’) movement, but occasionally switches to quasi-Marxist lucidity. The cover, a lithographic drawing by Widerstand co-editor Andreas Paul Weber, went on to become more iconic than the actual contents of the pamphlet.

Re-reading ‘Hitler: A German Disaster’ more thoroughly than my impatience with online texts allowed me to, it strikes me that the Weimar ultra-right – of which Niekisch was a part at the time of writing – used the term ‘democratism’ in much the same way as centrists use the term ‘populism’ today. END_OF_DOCUMENT_TOKEN_TO_BE_REPLACED

This rather charming obituary to Erich Mühsam was penned by the Communist author Franz Carl Weiskopf. It is printed on the dust cover of the Mühsam anthology, Publizistik: Unpolitische Erinnerungen, which was published in the DDR in 1978:

“He was an anarchist. He did not want to know about scientific socialism, nor did he have much time for the Communists’ tight discipline. He was more attracted to the rootless and the rebels. He himself was a rebel, not a considerate revolutionary. In a sense, he led a partisan struggle all of his own. However, the enemies he was fighting were our enemies too: philistines and profiteers, reformism and fascism, the capitalist world in all its manifestations. END_OF_DOCUMENT_TOKEN_TO_BE_REPLACED

The other day, I scored the first tome of Ernst Niekisch’s two-part autobiography, Erinnerungen eines deutschen Revolutionärs: Gewagtes Leben 1889-1945 (Memoirs of a German revolutionary: a daring life). Originally published in 1958, mine is a fairly rare 1974 hardcover edition.

Skimming the book, it strikes me that National Bolshevism is mentioned very little, if at all. Niekisch writes from the perspective of a left socialist with strong sympathies for the Soviet Union. Nationalism is invoked in the ‘anti-imperialist’ sense of resistance against the Versailles powers – but not, so far as I can tell, as the defining principle of the author’s worldview. END_OF_DOCUMENT_TOKEN_TO_BE_REPLACED 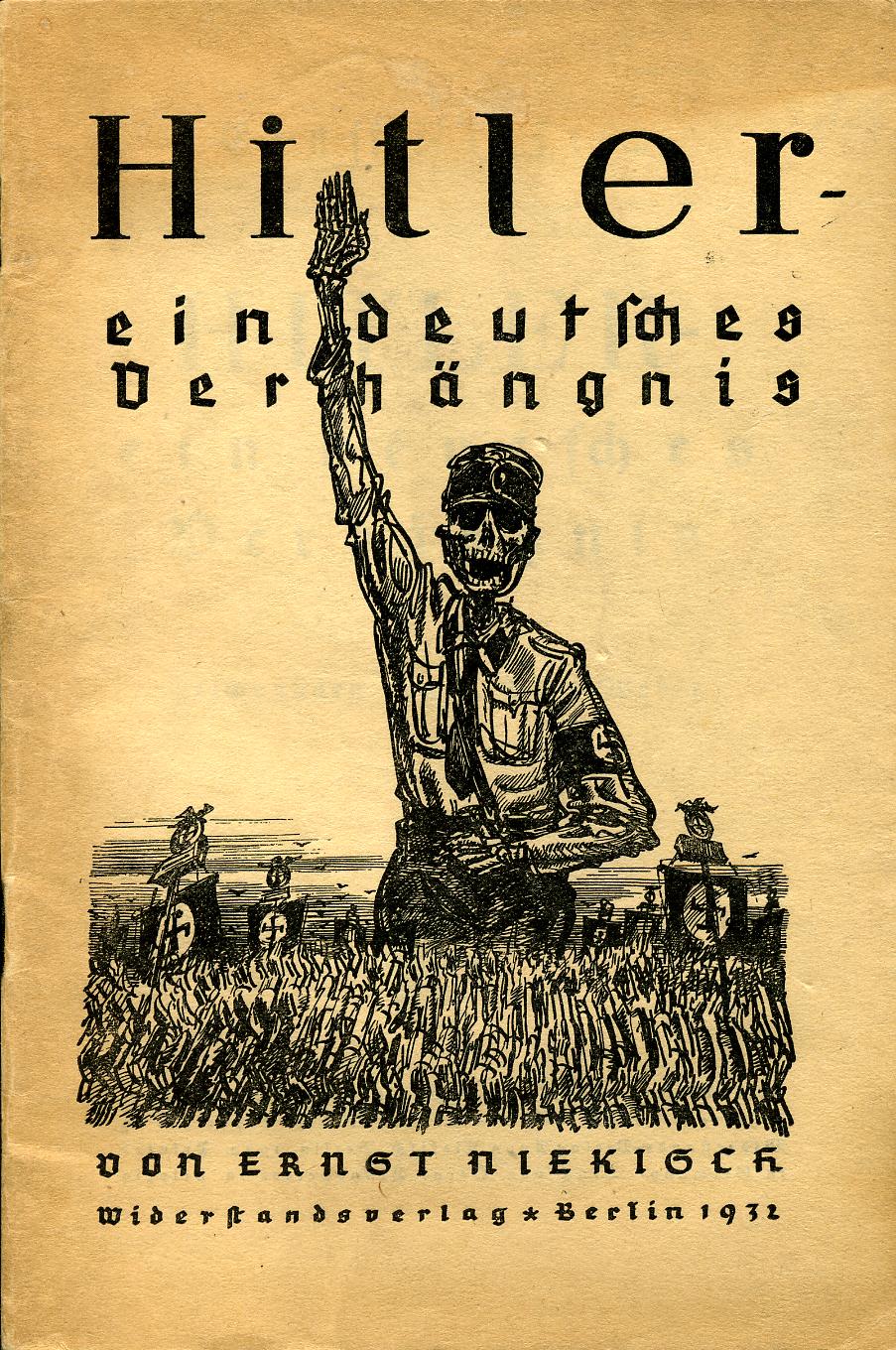 Digging a little into the legacy of Ernst Niekisch, I found an interesting bit from his 1932 pamphlet, Hitler, ein deutsches Verhängnis (Hitler, a German disaster). Niekisch describes Nazism as a movement based on the precarious and ruined middle classes, not unlike Leon Trotsky had done in the same year. This was not a new or especially Trotskyite observation: in fact, the Communist Party of Germany’s ‘Schlageter turn’ of 1923 had been entirely predicated on it.

Either way, it’s striking that Niekisch – a notoriously hard to pin down ‘National Bolshevik’ deemed “ultra-right” by the historian Louis Dupeux – writes in such lucid Marxist terms here, while speaking the woolly idealist language of the German ‘conservative revolution’ elsewhere.

I found Niekisch’s brief insight into why middle-class Hitler supporters hated the working class helpful: the workers’ collective strength and affinity to the Weimar state gave them a level of security that the petty bourgeoisie lacked. I’m reminded of the resentment Mail and Express readers feel especially towards London tube drivers, who remain one of the best-organised and therefore best-off sections of the working class. END_OF_DOCUMENT_TOKEN_TO_BE_REPLACED

My latest acquisition is an antiquarian book, ‘Die Schwarze Front’ (1932), which contains material by Otto Strasser and various Nazbol sects that he aimed to unite in a ‘Black Front’ against liberalism, communism and Hitler.

These people’s idea of socialism doesn’t sound too appealing. From the political platform:

“The youth must get used to strict subordination, obedience, an austere lifestyle, hardship, and other male virtues. END_OF_DOCUMENT_TOKEN_TO_BE_REPLACED

From the front page of SPD daily Vorwärts of 17 January 1919.

“In the night from Wednesday to Thursday, Rosa Luxemburg and Karl Liebknecht fell victim to an untimely and bloody death, which they had brought upon themselves against all pleas and advice from their friends and party comrades. Driven by a delusional idea, they were not content with the ‘first revolution’, which had brought such momentous change for so little sacrifice. END_OF_DOCUMENT_TOKEN_TO_BE_REPLACED

This morning 100 years ago, Rosa Luxemburg and Karl Liebknecht were brutally murdered at the hands of Freikorps soldiers. To what extent was the Social-Democratic Party complicit? My translation of a recent Frankfurter Rundschau interview with Klaus Gietinger about the murders was published on the Verso Books blog today.

Zuri Zone
Create a free website or blog at WordPress.com.